On a recent trip to London, when I read from my new collection, Midas Touch in Camden Town, I also took the opportunity to visit the Dickens House Museum at 48, Doughty Street. Dickens lived here for just under three years from early 1837 to the end of 1839. House museums are one of my favourite types of museum and the Dickens House Museum has some very good qualities and some less fortunate ones, in my opinion. I will explain. The best aspect of this museum, I think, is that the building itself, the structure, layout and condition are all pretty much as they were when Dickens and his family lived there. There have been no significant renovations or alterations so you see the place as Dickens knew it. Less fortunate, I felt, was the nature of some of the decoration and displays. The worst of these was the Christmas decoration so presumably that was temporary. The staircase and the main living room were decorated with modern Christmas decorations that I felt were completely out of place. I believe that the tradition of having a Christmas tree was just beginning at the time Dickens lived in this house. The first recorded use of the term in English dates from 1835. It gradually became more and more popular after that so it´s possible that Dickens may have had one in this house. However, the hanging paper and glittery decorations didn´t begin to appear until the 1860s so he definitely wouldn´t have had those. If he had any kind of decoration beyond the tree, it would have been a nativity scene and possibly home-made paper chains. Call me a grumpy old man, but I found these decorations out of place. There was even what looked like a Halloween mask. I don´t know what that was doing there.
Oh well, the Christmas decorations wouldn´t be there at other times of the year so it´s no big deal. In some of the rooms there were also exhibitions of various kinds, such as stage representations of Oliver Twist. This kind of information might be interesting, but again, I would prefer to see the room as close to its lived in condition as possible. The main bedroom on the second floor is entirely given over to changing displays of this kind and personally, I think that´s a shame. 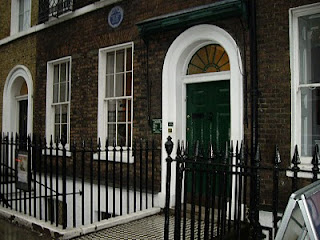 This is the desk that Dickens wrote some of his novels at. It is on display in his study on the first floor. Actually, this desk is from a later period in Dickens´s life, so he didn´t actually use this desk when he lived in Doughty Street. 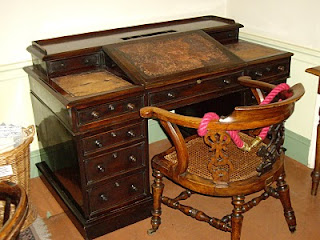 He wrote the end of Pickwick Papers, Oliver Twist, Nicholas Nickleby and part of Barnaby Rudge while living in Doughty Street.
On the second floor there are two bedrooms. The main bedroom with dressing room was used by Dickens and his wife, Catherine, though it is not furnished as a bedroom now, as I mentioned. The smaller second bedroom at the back of the house was often used by Catherine Dickens´s younger sister, Mary Hogarth. She died in this room very suddenly and completely unexpectedly. The family had been out at the theatre for the evening and when they returned, Mary collapsed immediately after saying goodnight and going to her room. They called a doctor but he could do nothing and Mary died the next afternoon. Dickens wrote in a letter that she had died in his arms. He had supported her to help her drink a little brandy, which she swallowed and he continued to hold her until after she had died. He removed a ring from her finger once she was dead and put it on his own finger and wore it for the rest of his life. He kept all of her clothes and used to go to look at them. He often visited her grave and dreamed of her every night for months after her death, so he wrote. He even planned to have himself buried beside her but had to abandon the idea when Mary´s grandmother and brother occupied the space when they died. Some biographers have speculated that Dickens may have been in love with Mary. Christopher Hibbert writes that Dickens `never fully recovered´ from her death and the figure of Mary appears in many of his novels.
Posted by Mike at 00:36