It's a first person narrative and I have to say that I enjoyed creating the character of the narrator. He is an odd chap. Surely, each reader will form their own opinion about him. If the historical King Arthur had been born in 1960 (about) would he have been like my Arthur? Maybe, maybe not, but my narrator gets into some situations that parallel events in the Arthurian legends. After a visit to his aging mother in a retirement home, a remark she makes starts him wondering if his father was really his father. So begins a stock-taking review of his life so far. His relationship with his wife is tense, but he scarcely seems aware of it. And then there's the memory that won't give him any peace: the worst thing he ever did.

But I mustn't give the game away. 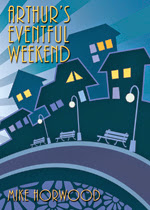