Not exactly sights in this number; I´m going to say a little about two well-known English institutions: pubs and fish and chips. But then again, I am going to point out two particular establishments, so maybe they count as sights.
Pub first. The last time we were in London we stopped for some liquid refreshment at The Cross Keys in Endell Street: 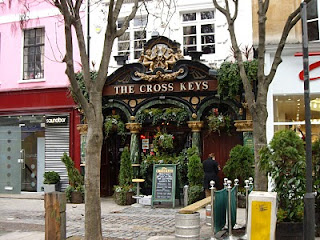 It´s a lovely little pub, very attractive from the outside, as you can see, and beautiful inside. The walls are covered with pictures, photos, posters and a huge selection of various objects. It´s like having a beer in an antique shop! The pub has a great atmosphere, very friendly service and there´s food, too.
But if you don´t choose to eat at The Cross Keys, you might want to walk just 50 or 60 metres up Endell Street to The Rock and Sole Plaice: 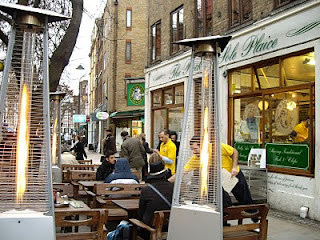 Fish and chips is quite a tradition in England, but it can vary a lot. When it´s not good, it can be pretty bad. Two key things to look out for: the batter coating the fish should be thin and crisp. If it´s thick and soggy, that´s a bad sign. Secondly, look for chips made from fresh potatoes, not frozen from a plastic bag. The meal should be cooked to order, not cooked in advance and then kept hot until somebody buys it.
How do you order your meal? Every fish and chip shop has a list of the fish on offer on the wall behind the counter. You select the type of fish you want. Some types of fish are well known to most foreign visitors: cod (turska in Finnish), sole (meriantura), haddock (very similar to cod), plaice (punakampela). But why not try something a bit different? We had rock salmon and skate. Skate is rausku in Finnish and rock salmon, or rock for short, is actually a kind of shark. Its real name is dogfish, which doesn´t sound very appetising, so they call it rock salmon, which sounds a lot more delicious. And it really was delicious. The flesh of rock salmon is very soft and white apart from some parts where there is more blood in the flesh and it´s a greyish brown colour. It has a large central backbone, but very few bones otherwise. Here it is: 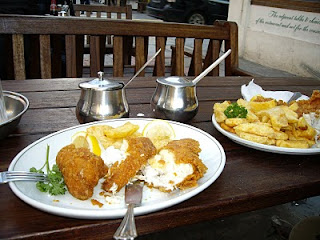 As you can see, the chips are made from fresh potatoes. The fish was soft and succulent and really tasty and the batter was crisp and delicious. The Rock and Sole Plaice is highly recommended. And they have outdoor seating with heating.
Posted by Mike at 07:08