It´s been a week since the end of our Cinderella pantomime´s run. The dust has settled (and the excitement) and it´s about time to post a couple of photos from the production. 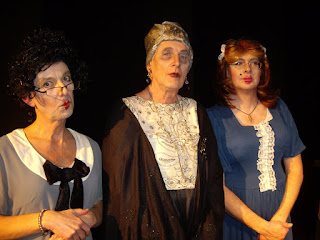 Here´s the wicked step-mother, Estella, and the two step-sisters. Nasty pieces of work, as you can see. A glass slipper would never fit on either of their feet, you might think. In fact, we took some liberties with the original story. In our version, the second sister, Patience, gets the slipper onto her foot, just after the Prince has recognised Cinderella. For a moment he looks from Cinders, to step-sister, and back; then decides to take Cinderella. Patience points out to her sister, Prudence, that they never had a chance, whereon Prudence suggests that there are plenty more fish in the sea. Exit Buttons and Manfred, hotly pursued by the two sisters.

The mirror-on-the-wall also made an appearance, and after informing the Queen that she was not the fairest in the land and being informed in her turn that she was in the wrong fairytale, went on to advise the Queen that the Prince was in need of a wife. That got the plot back on track. 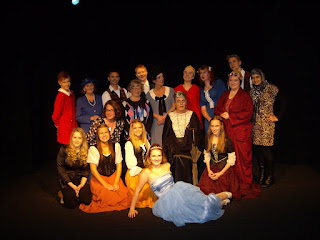